Welcome back, I trust I find you all well. I deemed it prudent that the next few posts on this blog should contain a more standard overview of my two main case studies, as well as some explanations of terms/phrases/concepts that I'll be using often throughout my posts. If you know all of these things already, please feel free to disregard this post, otherwise stick around!

Let us begin by pinning down this spectacularly interesting and vibrant population geographically. Historically, other European populations would know this region as Lapland, but the Sámi population (previously known by the wider world as Lapps) have made it clear that this is not the true name of the region. Therefore, on this blog I will exclusively be referring to the region as Sápmi. It covers most of northern Scandinavia, and here's a map to give you an idea of just how enormous this region is. 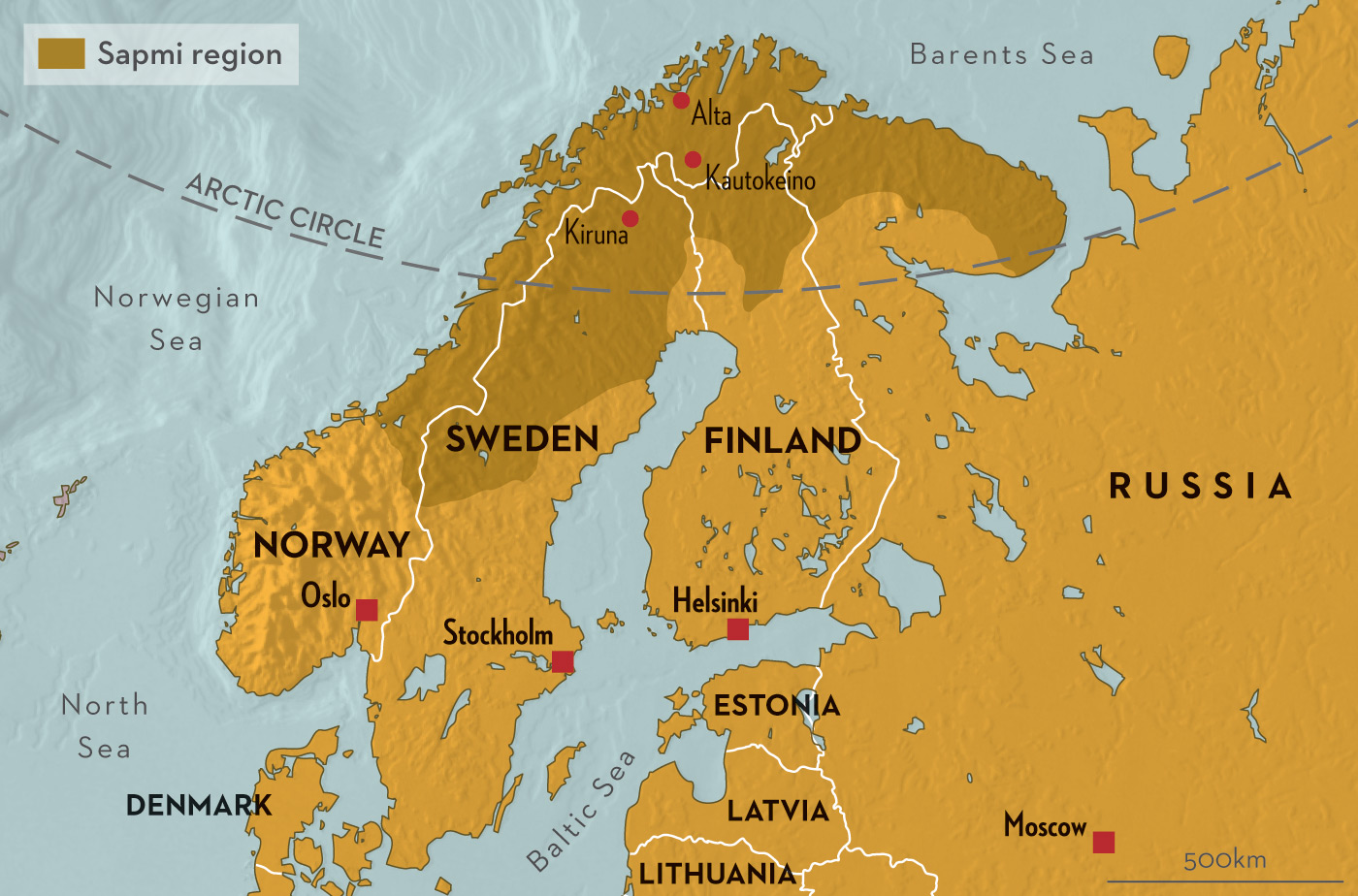 Mostly, I'll be focusing on the Lulesámi area, in north-east Sweden. Unsurprisingly, it's the area north of and including Luleå

In past centuries, the Sámi people have been somewhat nomadic, following migratory routes of the reindeer on which they historically depended. Archaeologically speaking, there is evidence for their existence dating back to approximately 10,000 BC. This makes them one of the oldest indigenous populations in Europe. Unfortunately, their modern history has been fraught with complications, ranging from strict policing of country borders, compromising reindeer migration routes, stifling of the Finno-Ugric languages and the outlawing of ancient religious practices. This has resulted in a fairly unique generational gap in many of the modern Sámi communities, as the main revival of older indigenous traditions and arts happened during the 1970s.

I did my fieldwork in the small town of Jokkmokk (for those IKEA aficionados out there: yes, I know there's a table-and-chairs set with the same name), which is an absolutely wonderful place that acts as a veritable hotbed for Sámi culture, events and tourism every February.

I'm not going to dwell too long here; being decidedly non-Sámi myself I've concluded that it's certainly not my place to bulldoze through this very tricky set of issues with my own opinions as an etic observer. Nonetheless, the current movements and debates surrounding the rights of indigenous populations remain a significant factor in the further development Sámi culture and media, and it is therefore necessary to consider such movements in the course of my research.

In modern Scandinavia, most of the primary political Sámi concerns are focused around land rights and access to languages. The Norwegian, Finnish and Swedish governments all theoretically own very large amounts of Sámi-controlled land, and consequently are able to use it as they like. Namely, this involves removing large areas of forest. This is a significant issue for the more traditional reindeer herders, as the reindeer mostly feed on Clandonia rangiferina (aptly named "reindeer lichen"), which grows on the ground in pine forests. It's very slow-growing and can take potential decades to fully replenish. Decisions to compromise the forested regions therefore have lasting effects on the migratory routes of the reindeer, as their herders' choice of feeding points become more sparse and limited. Recently, more victories are being won for the Sámi in this area, as Norwegian Sámi have strong representative force in the country's Parliament, and individual areas continue to be gradually returned in Sweden and Finland to give the Sámi populations there exclusive control over hunting and fishing.

As for access to languages, this is a slightly more historically extensive problem. Throughout a large part of the 19th century, initiatives were put in place in all three northern Scandinavian countries ensuring that schooling took place only in the Southern languages (Norwegian, Swedish, Finnish), and it has taken until the early 1990s for Language Acts to be passed in these countries' Parliaments, ensuring that Sámi populations have linguistic recognition and the right to use the languages in government services. There are around nine Sámi languages still spoken throughout the region, though some of these are now perilously close to extinction; in one case, Ter Sámi, as few as 2 native speakers remain from 2010. There is now a significant drive to revive and re-instil them in schools, and many Sámi musicians perform joiks, songs, and in one case even raps in these languages.

Amoc, a Finnish Sámi rapper, who performs in Inari Sámi, now only spoken by 300 people according to the Finnish government.

Amoc brings us very nicely towards the question of Sámi music: what does it sound like, and why do I love it so much? Traditionally, their musical traditions are very heavily vocally based, which is what I will mostly be focusing on for the purposes of my research, but do watch this space for some commentary on shamanic drums, as they are equally fascinating. A Buzzfeed article described Sámi folk music as "beautiful and haunting", which while I technically agree with, doesn't even begin to scratch the surface. It is an utterly unique tradition which has managed to secure a place in human consciousness throughout the region of Sápmi that I would not have believed possible through voice, and this is one of the many reasons I have chosen to study it in further detail.

First of all, I'm going to give a quick overview of the word "joik", as you will read it on this blog probably fifty times more often than the word "song". The rest of the world uses the word as a catch-all term for all Sámi vocal traditions, but "joik" generally refers to the developed technique of the large Northern Sámi population. It can be variably spelled with a J or sometimes with a Y.

I've always found it extremely difficult to sum up exactly what a joik is in a single sentence, so I'll share a description from Katarina Rimpi, a Swedish-Sámi joiker whom I had the pleasure of talking to during my Jokkmokk fieldwork: "To joik is to be, to tell, to feel and to know things".  I suppose what she meant is the idea that you're not joiking about something, you are joiking something. Essentially, vocally representing or forming a sonic evocation of a person, creature, object, landscape, idea, or anything else you can think of. It's an incredibly versatile technique which can be applied to many different public and private situations (one musician I spoke to confirmed that there are joiks in his repertoire he uses in solitude). They can be brought on by a reaction to or appreciation of an event or situation, they can be used as an outpouring of grief, joy or simply to enjoy a sense of connection and oneness with a natural environment.

They can start completely spontaneously, or as part of a wider piece of music. One of the more traditional uses is while reindeer herding, travelling up and down the ancient roads of Sápmi. A marvellous example of that context can be heard in this excerpt of Nils-Aslak Valkeapää's Bird Symphony. This piece is particularly interesting to me, as it is a direct exploration of the soundworlds of Sámi landscapes and environments, something that my theory would argue is integral for determining the human tendency to reimagine a sound that existed centuries or millenia past. We'll talk some more about Valkeapää and his work very soon, I promise.

To an extent, some animism and imitation can be heard within a joik's melodic form, along with plenty of ornamentation and extended free phrasing. More recently, the technique of joik is often used in fusion with other elements of southern European and north American traditions, a significant example being the opening track of Disney's Frozen, where Norwegian Sámi composer and joiker Frode Fjellheim featured his joik "Eatnemen Vuelie" ("The Earth's Joik" in southern Sámi dialect) fused with a choral arrangement of Danish hymn "Dejlig der jorden". The contexts and implications of Sámi music and other elements of their cultures being used in Frozen will be a blog article all to itself in the future, as I could talk about it for hours.

This was intended to be a basic overview of the Sámi people, where they're from, what they have historically been associated with, and a very brief introduction into their musical traditions. I'll sign off now and leave you with a few links to particular Sámi musicians that I enjoy, and that I feel are good starting points for examining the intricacies of the tradition. Take care, and see you next time!

Sofia Jannok, Swedish-Sámi joiker, singer and radio host, who enjoys great popularity as she was recommended to me by many residents of Jokkmokk during my fieldwork.

Ulla Pirttijarvi, the first joiker I ever heard, and perhaps for that reason remains my favourite. She is from the Inari region of Finnish Sápmi, and remains active in the revival of joik in schools. I'll write about her some more soon!

Katarina Rimpi, performing with her band Jarnna. A joiker I was introduced to during my Jokkmokk fieldwork, and who was gracious enough to talk to me about her work and provide me with some very valuable insight.

Jorgen Stenberg, another joiker who performed at the Jokkmokk winter market.